Costa Ricans or “Ticos” are friendly people who will be delighted in showing their lovely country to visitors. Wherever you go you will find the locals to be a constant source of help, smiles, and information. Most of them do not speak English, but still they will help you in any way. If you make an effort to speak or say some words in Spanish, it will be a great way to thank them for their kindness.

Some basic words and phrases are:

The ¨Ticos¨ as Costa Ricans are called are people proud of their culture and   the extraordinary natural richness that sorrounds them. They are persistent in their religious convictions and very family oriented.   They have generally a calm friendly attitude and they will use their humor and charisma in order to avoid a conflict.

Costa Rica is a peaceful nation, which has always avoided conflict and any miltary actions.  Instead it has a conflict resolution based in negotiation and its efforts have been dedicated to develop social equality. It is considered a progressive nation, as it has more teachers than policemen, more biological reserves than cities and an endless dedication to social programs.  This vision of civilization came earlier for Costa Rica than for many Western nations. With the establishment of free tax-subsidized education as a constitutional right in 1869, the elimination of the death penalty in 1882, and the dissolution of the national army in 1948, it's clear that social development and order are key to Costa Rica's approach.

Ticos are predominantly direct descendants of Spanish colonists, the greatest immigration whom came in the early 1800s to grow coffee. Its small  indigenous population is virtually unseen as many of them prefer to stay within the confines of their reserves. On the the Caribbean coast, African slaves and the indigenous natives mixed as early as the 1500s, producing  developing a population of darker completion and African features. In addition, the past 150 years, Costa Rica´s population has seen the immigration of Chinese and Italians and to a lesser degree, German and French.

Costa Ricans are usually very polite, quick to shake hands or place a kiss on someone´s cheek and they tend to use formal Spanish. Family is also very important, and it is considered polite to ask about how is their family doing.

If you are invited to  someone´s home, take a hostess gift such as flowers, chocolates  or something special from your home country. If you are offered food, try to eat it even if you are not hungry. Costa  Ricans don´t like to say no  and will avoid answering no, just saying ¨gracias¨.

Dress code in San José is more formal than in the countryside. People usually don´t wear shorts outside the beach areas and they use leather dress shoes, instead of tennis, unless they are doing sports.

Costa Ricans or “Ticos” are friendly people who will be delighted in showing their lovely country to visitors. Wherever you go you will find the locals to be a constant source of help, smiles, and information. Most of them do not speak English, but still they will help you in any way. If you make an effort to speak or say some words in Spanish, it will be a great way to thank them for their kindness.

Some basic words and phrases are: 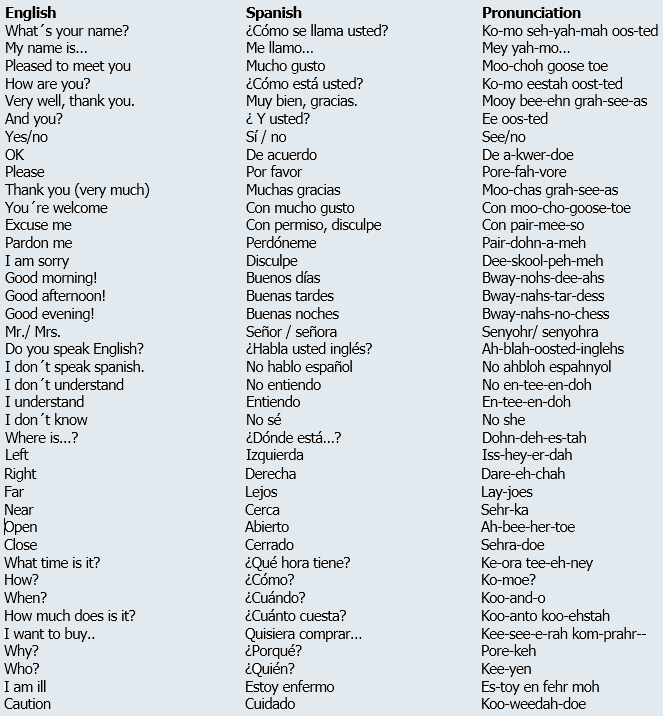 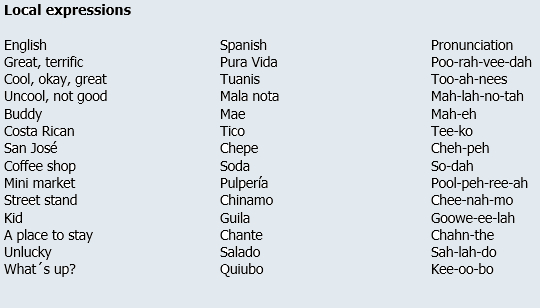 Costa Rican cuisine is generally quite healthy and balanced, based on fresh meats and vegetables, herbs and light spices.  Food is not spicy, similar to Mexican, as many travelers expect.  Rice and beans is the basic variable in almost all Costa Rican cuisine. A typical meal is the casado, the name referring to the eternal "marriage" of its ingredients. It consists of rice and beans, meat or fish, fried plantains, and a cabbage with tomato salad.

For breakfast, it is common to be served a hearty dish of black beans and rice  (called gallo pinto) seasoned with onions and peppers, accompanied by fried eggs, sour cream, and corn tortillas.

Vegetables are mostly used in soups and stews. Corn is one of the most popular vegetables, and it is usually used to prepare  tortillas and corn pancakes. Corn on the cob is sometimes roasted, elote asado, or boiled, elote cocinado. Empanadas are corn turnovers filled with beans, cheese, and maybe potatoes and meat. Guiso de maíz is a corn and chayote (vegetable pear)  stew.

Olla de carne is a delicious stew made with beef, potatoes, carrots, chayote (vegetable pear), plantains and yucca. Sopa negra is a simple soup made with black beans. The hearty Sopa de mondongo is made with tripe and vegetables.

The plantain, or plátano, has the appearance of a large banana, but cannot be eaten raw. It is sweet and delicious when fried or baked, and will often accompany most meals. When sliced thinly and deep fried, the plantain becomes a crunchy snack like the potato chip. Patacones are fried mashed plantains with a sprinkle of salt.

Fresh seafood is more readily available near the coasts or in San José. San José's fish of choice is sea bass ( corvina) or  mahi-mahi (dorado). As a common appetizer, Ceviche is a dish of raw fish marinated in lemon juice with cilantro and onions.

The Caribbean coast has its own unique cuisine, distinctive of the rest of the nation. The dishes usually include coconut milk and spices like ginger and curry. Grated coconut is used in many deserts and cakes. The patí is a spicy meat pie resembling a turnover. Rondon ("rundown") is a fish soup with plantains, breadfruit, peppers and spices.

You will find a large range of souvenir and gift shops around the country, specially in San José, Sarchí (a town with hundreds of traditional woodcraft shops) and on larger hotels.

Costa Rican artisans have a strong tradition of woodworking. The most attractive arts and crafts you will find in the country are made out of precious woods: bowls, boxes, jewelry, masks,  mobiles, home accessories  among other crafts.  You will also find nice jewelry, ceramics, handmade banana and coffee paper, leather goods, seed crafts, basketry and more. You will also notice that some of the souvenirs are made in other Central American countries, specially some of the ceramic and textile crafts.

Coffee is also a good souvenir, and you can find high-quality Costa Rican brands in most super markets, with no need to pay inflated costs for export brands marketed at souvenir shops.